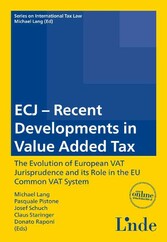 Niall Campbell is an Indirect Tax Partner and Head of Innovation with KPMG in Ireland. Niall is also former Head of KPMG’s Global Indirect Tax Services practice. Niall has served on the Chartered Accountant's Ireland Taxation Committee, the VAT practitioners/Irish Revenue Commissioners liaison committee and the Indirect Tax Committee of FEE, the pan-European accounting body. He is a member VAT Expert Group of the European Commission

Michael Conlon QC is currently Head of Indirect Tax at Hogan Lovells International LLP. His career has included government legal service, professional firms and practice at the Revenue Law Bar. He is President of the VAT Practitioners Group and a Fellow of the Chartered Institute of Taxation.

Ad van Doesum is professor of Value Added Tax at Maastricht University and Senior Tax Adviser with PwC in Amsterdam. He is appointed as a judge in the District Court The Hague.

Thomas Ecker is Deputy Head of the VAT Unit in the Austrian Federal Ministry of Finance. He is, inter alia, delegate to the EU Council Working Groups, EU VAT Committee, and OECD Working Party 9 on consumption taxes, and its Technical Advisory Group.  He was previously a research associate at the Institute for Austrian and International Tax Law at WU where he still lectures. He is editor of books and a commentary as well as author in the field of VAT and international tax law and has inter alia written the award winning book ‘A VAT/GST Model Convention’ (IFA Maurice Lauré Prize 2012).

Joachim Englisch holds a chair in tax law and public law at Münster University and has published and lectured extensively on VAT topics. He is a founder and the general editor of the World Journal of VAT/GST Law, appointed counsel to the OECD WP 9 (consumption taxes) and to the EU Commission (VAT expert group), and vice president of the German VAT Forum.

Oskar Henkow is an associate professor at Lund University, a teacher and researcher in EU law and indirect taxes, who has published extensively on EU and international VAT/GST issues in particular. He is the Programme Director of the Master Programme in European and International Tax Law at Lund University, an alternate member of the VAT Expert Group, advisor on VAT to the World Bank and has extensive practical experience as a tax advisor.

Arthur Kerrigan graduated from Trinity College with BBS and MA degrees. He has spent most of his working career with the European Commission and currently heads up the sector responsible for VAT on international services. He also represents the Commission in the OECD’s work on consumption taxes. He has published a number of articles on VAT issues, most notably dealing with financial services. A forthcoming book on ‘Taxing Banks Fairly’ which will be published by Birmingham University later this year includes a chapter setting out his thoughts on the feasibility of applying VAT to financial services.

Herman W.M. van Kesteren is an Indirect Taxes Partner at PwC based in Amsterdam and is responsible for knowledge management and litigation in the field of VAT. He is a professor of indirect taxation at Tilburg University and a judge in the Hertogenbosch Court of Appeals and in the Gravenhage Court of First Instance.

Since 28 April 2014, Ine Lejeune is Partner at Law Square and member of the Brussels bar. Law Square is the independent corresponding law firm in Belgium for the member firms of the PwC global network. Ine is responsible for Tax Policy and Dispute resolution & Litigation from a Belgian, EU and global perspective. She has vast experience in EU Case Law, Litigation EU complaints and policy build up in the past 30 years. She was up to April 2014, PwC's Global Tax Policy and Administration Network the Indirect Taxes Policy Leader and the partner responsible for tax and legal services to the EU Commission’s Directorate General for Taxation and was since July 2012 the Global Relationship Partner at PwC for services to the European Institutions. She was previously, until April 2012, for 10 years PwC’s Global Indirect Taxes Leader, responsible for leading a network consisting of over 2.000 PwC experts based in 130 countries. Ine is since 2012 a member of the EU Commission’s VAT Expert Group and the OECD Consumption Tax TAG. Ine is Lecturer at Wirtschaftsuniversität Wien (Vienna University of Economics and Business) in the framework of the LLM programme since 2010. She is the author of many books and articles on Global and EU VAT. She is Belgian Taxman 2009.

Richard Lyal is a member of the Legal Service of the European Commission.

Peter Mason is a Partner in the newly formed Legal practice of Rosetta Tax LLP. He is a Chartered Tax Adviser, Accountant and Barrister, based in London. He was previously Head of VAT at CMS Cameron McKenna LLP, and before that at Abbey National, where he took some interesting cases to the CJEU. He now advises and represents clients, and lobbies at national and EU level, in particular in the finance, funds and insurance sectors.

Rebecca Millar is Professor of Law at the University of Sydney, Australia. She is also a pro bono academic advisor to the secretariat of the OECD's Working Party No 9 (WP9), a member of the Australian Taxation Office’s GST Advisory Group, and a member of the editorial board of the World Journal of VAT/GST Law. Professor Millar’s research focuses on Australian goods and services tax (GST) and comparative value added tax (VAT).

Andrea Parolini is a lecturer (professore a contratto) of VAT and EU Tax Law at the Catholic University of Piacenza. He is author of many publications on tax matters and a member of the VAT expert group. He is one of the partners of the Italian tax law firm Maisto e Associati.

Sebastian Pfeiffer obtained his doctoral degree at the Institute for Austrian and International Tax Law and wrote his thesis on VAT grouping from a European perspective. He now works for the Austrian Federal Ministry of Finance in their VAT department and is an external lecturer at the WU (Vienna University of Economics and Business).

Donato Raponi is currently Head of the VAT Unit at European Commission. He worked in the Budget, Internal Market and Taxation Directorates. In the area of taxation policy he served in different posts, e.g. administrator, assistant to the Director, deputy Head of the VAT Unit, Head of the Unit dealing with excise duties, environment, transport and energy duties and Head of tax administration and anti-fiscal fraud Unit. Donato Raponi holds a Master’s degree in European tax law (droit fiscal européen). He is professor of European tax law (indirect taxation) at ESSF (Ecole supérieure des sciences fiscales, Brussels). He is Co-author of the book ‘Arriva l’euro’ (Carmenta Editor) and several articles on tax matters.

Marcos Álvarez Suso holds a bachelor degree in law from the Universidad Complutense of Madrid. He has been working as a tax auditor for the Spanish Tax Administration for 18 years, with special devotion to VAT, aggressive tax planning and tax crimes. He usually attends international meetings in the EU, OECD and IOTA environment, and is also author of many studies regarding tax law and tax practice both in Spanish and international magazines. He is currently leading the Deputy Direction for legal affairs in the Tax Audit Department of the Spanish tax administration.

Prof. Dr. Edoardo Traversa teaches tax law, with a focus on VAT and International and European tax law, at the Faculty of Law and Criminology of the Université Catholique de Louvain. His research mainly addresses the different aspects of European Union tax integration, among which VAT hamonization. He is also Of counsel at Liedekerke law firm (Brussels). He has been appointed visiting professor at the Institute for Austrian and International tax Law (WU) for the academic year 2013-2014.