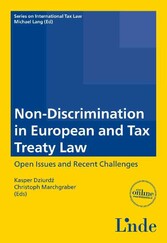 This book takes up and deals with selected issues in depth. Although the relevant non-discrimination provisions are different in wording and context, often the same issues can be analyzed under both the EU fundamental freedoms and Article 24 of the OECD Model. The results under these non-discrimination provisions may differ. However, similar policy considerations and arguments often influence the final decisions. With this book, the authors and editors contribute to the discussion on selected issues of the various non-discrimination concepts and the challenges they present.