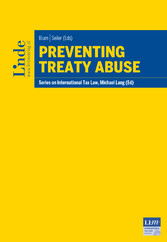 The OECD initiative on Base Erosion and Profit Shifting has put the issue of treaty abuse and the means to counter it on top of the global political agenda. Preventing treaty abuse is therefore currently one of the most debated topics in international tax law. Diverging national legal traditions in combatting abuse both under domestic and tax treaty law have led to a globally diversified legal framework in this respect and make the OECD’s agenda to harmonize these attempts even more challenging.

The aim of this book is to analyze the notion of treaty abuse, its historical roots and the measures to counter it. The book’s topics cover a wide range of both policy and legal issues. The contributions’ main focus lies on analyzing the proposals put forward by the OECD in BEPS action items 6 and 7. In addition, this book analyzes the lessons which can be learnt from the US tax treaty policy and elaborates on the effects the intensified fight against treaty abuse will have from a Non-OECD member state perspective. Also EU law is taken into account and the question raised which impact the fundamental freedoms might have on the development of new anti-avoidance rules.
Finally the relation between domestic and treaty based anti-avoidance is analyzed in great detail, identifying the methodical problems of ensuring a sound and abuse safe legal framework.

With this book, the authors and editors hope to contribute to the discussion on selected issues of preventing treaty abuse and the challenges they present to policy makers, judges, tax administrations and tax advisers.