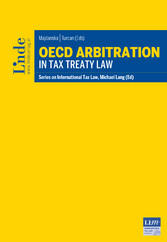 Mohit Agarwal is a qualified chartered accountant in Mumbai, India. He graduated in commerce from Symbiosis College, Pune University. He worked with EY in the Mumbai office for five years as a tax manager with tax and regulatory practice.

Verónica Barone is a lawyer from Universidad del Rosario with a degree in Tax Law from Universidad Externado de Colombia and an LL.M. degree in International Tax Law from Vienna University of Economics and Business. She has knowledge in tax, customs, and international trade, foreign exchange, and corporate law and has been employed in these matters as an adviser in law firms since 2010.

Gela Barshovi obtained his bachelor degree in business administration from Tbilisi State University in July 2010. In September of 2010, he began working at the Georgia Revenue Service (GRS, Tax and custom organization). In 2015, he became a transfer pricing chief auditor of the same organization where his responsibilities included conducting transfer pricing audits and audits concerning tax treaty applications as well as leading a group of auditors. At the same time, he began conducting seminars at the Academy of Ministry of Finance of Georgia on the issues of international taxation. In that year, he also became a member of working party 6 of the BEPS project. Currently, he continues employment in the same position at the GRS.

Denisse Borja was born in Guayaquil, Ecuador, in 1992. In 2015, she completed her Bachelor in Law at Universidad Católica de Santiago de Guayaquil and graduated with a distinction in Public Law. From 2012 to 2017, she was employed as a legal and tax consultant at EY Ecuador, providing advice with regard to the tax implications of international transactions and also legal assistance in Customs affairs.

Cristina Camino Díaz was born in Spain in 1993. In 2015, she received her degree in Law at the University of Cantabria after completing an International and European Law program at the Vrije Universiteit of Brussels. In 2018, she completed a LL.M. degree in International Tax Law at Vienna University of Economics and Business (WU) in Vienna, Austria.

Tarini Chaudhary is a chartered accountant in New Delhi, India. She graduated with honors in commerce from the Shri Ram College of Commerce, Delhi University. She has been working with KPMG in New Delhi since 2014, initially as a member of the Statutory Audit department followed by the International Tax division, and has worked on a variety of diverse assignments during this tenure.

Timoleon Angelos Christodoulopoulos was born in Thessaloniki, Greece, in 1990. He received a degree in law at Democritus University of Thrace in Greece in 2015 and completed his LL.M. in Commercial & Corporate Law at Queen Mary University of London in 2016. He has been a qualified lawyer in Greece since April 2017.

Roberto was born in São Paulo in 1987. In 2009, he obtained his degree in Law at the Law School of Fundação Getulio Vargas (FGV-SP), where he also received a LL.M. degree in Law and Development, in 2012. In 2014, he became a PhD candidate at the Law School of University of São Paulo (USP). He is currently a tax lawyer in São Paulo, Brazil, focused in tax litigation and tax advisory.

Rodolfo was born in São Paulo in 1987. In 2009, he obtained his degree in Law at Pontifícia Universidade Católica de São Paulo (PUC-SP). In 2014, he completed his Post-Graduate in Brazilian Constitutional Tax Law at the same university. From 2012 until 2017, he fulfilled his mandate as a Counselor of the Ethics and Discipline Court of Brazilian BAR Association. In 2016, he obtained a certificate in accountancy for non-accountants at FIPECAF-SP. He is currently a tax lawyer in São Paulo, Brazil, focused on litigation and advisory for merger and acquisitions.

Alejandro del Valle Jiménez received his law degree at the Universidad Panamericana (UP). Furthermore, he holds a diploma in taxation from the Instituto Tecnológico Autónomo de México (ITAM) and a course in International Tax Law by New York University (NYU). He has worked both in the private and public sector in tax related matters, specifically in the Mexican Judicial branch and in tax law firms.

Ana Elena Dominguez Gonzalez was born in Mexico City in 1992. She completed her Juris Doctor degree at Universidad Panamericana in 2016. Furthermore, she achieved two diploma courses in both international and national taxation at the New York University (NYU) and the Instituto Tecnológico Autónomo de México (ITAM). From 2013 to 2017, she has worked as a lawyer at the tax law firm Chevez, Ruiz, Zamarripa y Cia and at Ernst & Young Mexico.

Jana Fuksová graduated with honours from the Faculty of Law of Charles University in Prague in 2014.In 2016, she defended her rigorosum thesis on Tax aspects of insolvency proceedings. She is a certified tax advisor and since 2014 she has been working for KPMG. She specializes mainly in the area of tax litigation and taxation of financial institutions.

Ivo Grlica earned a degree in Law at the University of Ljubljana in 2011 and has, since then, has been active as legal and tax consultant (admitted to the Slovenian Bar Association in 2015). He is actively involved in research on legal and tax challenges of the sharing economy, cryptocurrencies, and distributed ledger (blockchain) technologies. Ivo has published numerous articles on tax aspects of innovative digital business models, smart contracts, and smart law. Ivo Grlica is an active member of AmCham Slovenia Blockchain Task Force, Blockchain Think Tank, and a founder and partner of “Smart Law Solutions” legal consulting agency.

Benjaporn Jitburut completed her B.A. in Political Science (International Affairs) with honors in 2008 and received an MBA degree in 2012 at Thammasat University, Thailand. Prior to joining the Thai Revenue Department as a Tax Economist in the International Tax Division, she worked for PwC Thailand as a tax consultant in the areas of personal income tax compliance and advisory and participated in the Long-Term Development Program at PwC Singapore. Upon completing the LL.M. in International Tax Law, she intends to continue working in the international taxation field. Her ultimate goal is to become a leading international tax expert and use her capability as a driving force to improve international taxation standards in the Thai tax system.

Petra Kamínková received a master’s degree in Diplomacy at the University of Economics in Prague and a master’s degree in Law at Charles University where she also received her postgraduate degrees, JUDr. and Ph.D, in Financial Law. She XIVspent part of her studies at Università degli studi di Perugia and at the University of San Francisco. Since 2009, she has worked as a tax advisor at EY and PwC. Currently, she works as a lawyer at the Ministry of Justice of the Czech Republic.

Joni Korhonen received a degree in law at the University of Turku and a degree in economics at Turku School of Economics in Finland. He completed his court training in 2011. He was previously employed as a tax auditor for the Finnish Tax Administration and currently works as a tax advisor in the private sector.

Cesar Ozolins Manzione was born in São Paulo in 1984. In 2010, he completed his B.A. in Law at the Law School of Fundação Getulio Vargas (FGV) in Brazil, becoming an attorney-at-law at the beginning of 2011. In 2014, he completed his Specialization Course on tax law at Pontifícia Universidade Católica of São Paulo (PUC-SP) in Brazil. As a specialist in indirect taxes and foreign trade, he dedicates a large part of his practice to the restructuration of companies, assessing the relevant effects on indirect taxes, the tax burden incurred on routine transactions, and the assessment of tax benefits. He also acts in defense of...