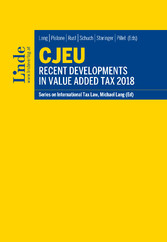 Marcos Alvarez Suso holds a degree in law from the Universidad Complutense of Madrid. He has been working as a tax auditor for the Spanish Tax Administration for 20 years, concentrating on the areas of VAT, aggressive tax planning (direct and indirect taxation) and tax crimes. He frequently attends international meetings in the EU, OECD and IOTA environment, and has also authored many studies on tax law and tax practice both in Spanish and international magazines. He currently leads the Deputy Directorate for Legal Affairs in the Tax Audit Department of the Spanish tax administration.

Paolo is a member of two research committees of the Italian Association of Accountants and a member of the VAT Expert Group and of the EU VAT Forum at the European Commission. He is the author of over 30 publications on tax matters and has taken part in the preparation of 8 collections. He is also a member of editorial committees of specialized tax journals and has made several contributions to Italian tax reviews and financial newspapers.

Ad van Doesum is Professor of European Value Added Tax Law at Maastricht University. He is Head of PwC’s Tax Knowledge Centre in the Netherlands. Moreover, Ad van Doesum is appointed as an honorary judge at the Hague District Court. He has written numerous articles on VAT, published several books and is a member of various editorial boards. Ad has wide experience of litigating VIIIfor clients and delivering legal opinion letters on complex technical and legal issues regarding VAT.

Dr Englisch holds a chair for tax law and public law at Münster University. Since 2011, he is the managing director of the institute for tax law at this university. At the time of writing, Dr Englisch also held the Alfred-Grosser-Chair 2018/2019 at Sciences Po Paris. His main research activities are devoted to International and European tax law covering both, direct and indirect taxation. Dr. Englisch also acts as an advisor to the OECD Committee on Fiscal Affairs, and he is a permanent member of the VAT Experts Group of the European Commission.

Stefania Lotito Fedele is a PhD candidate in European and International Tax Law at the University of Bari (Italy) and a visiting PhD candidate at the Université catholique de Louvain (UCL). In 2007, she was named as an Expert in Tax Law by the University of Bari. She is also a tax attorney and partner of Okto&P., Tax Law firm in Trani, Italy; a legal advisor at the Italian delegation of Lawyers (CNF) in Bruxelles; a tax legal advisor at the CCBE (Council of Bars and Law Societies of Europe). In addition, she is the author of various scientific contributions on tax matters in Italian and English.

Walter Hellerstein is Distinguished Research Professor and Shackelford Professor of Taxation Emeritus at the University of Georgia Law School, Athens, Georgia, USA. He is co-author of , vols. I & II (3rd ed. [updated tri-annually]); (10th ed. 2014); and(2013), and has authored more than 100 journal articles. He serves as an academic advisor to the OECD’s Working Party No. 9 on Consumption Taxes and is a member of the Working Party’s Technical Advisory Group on the VAT/GST Guidelines.

Charlène A. Herbain (PhD) is a VAT specialist. She is a senior managing lawyer in the tax policy and tax litigation practice at PwC Legal (Belgium) and she is a case law notes editor for Intertax (kluwer Law International). She teaches at the Université catholique de Louvain. She is also a Senior Lecturer at the University of Luxembourg (LL.M in Taxation) and Adjunct Lecturer at the University of IXNancy II Faculty of Law (Magistère juriste d’affaires européen). She has been named as an Indirect Tax Leader (2014, 2015, 2017 and 2018) by International Tax Review, and her Ph.D. thesis, “VAT Neutrality” has been published by Larcier-Promoculture and received very honorable mention from the jury of the IFA Maurice Lauré Prize in June 2015. Prior to her current work, Charlène worked for 2 years as a post-doctoral researcher at the Catholic University of Louvain and spent 10 years in a variety of corporate roles.

Prof. Dr. Herman W.M. van Kesteren is an indirect tax partner based in Amsterdam (PwC), the Netherlands, with over 20 years of experience and is currently responsible for knowledge management and litigation in the field of VAT. Herman received his law degree (major in tax) at Leiden University and lectured in European VAT at this university before transferring to Tilburg University in 2000 where he was appointed professor in the field of VAT in 2003. He is a judge in the ‘s-Hertogenbosch Court of Appeals and in the ‘s-Gravenhage Court of First Instance. Herman has often been a (guest) lecturer both in the Netherlands and abroad for academic scholars as well as for tax practitioners. He serves as a lecturer on several international programmes. Herman is also a regular speaker at seminars and conferences on EU VAT Law. He actively contributes to thought leadership and has written several books in the area of VAT. He has also written numerous articles for legal periodicals and has contributed to several papers.

Prof. Dr. Marie Lamensch is Research Professor of International and European Tax Law at the Institute for European Studies and the Law Faculty of the Vrije Universiteit Brussel. She is also a visiting Professor at the Université Catholique de Louvain and the Katholieke Universiteit Leuven and is a member of relevant expert groups of the OECD, the World Customs Organisation and the EU Commission. Prof. Lamensch is also a trainer at the IBFD’s International Tax Academy and works as Technical Editor of the International VAT Monitor. She obtained her Doctorate at the Vrije Universiteit Brussel in July 2014 and her PhD dissertation was awarded the 2015 Maurice Lauré Prize (International Fiscal Association).

Ine Lejeune is an attorney at law and partner leading the Tax Policy, Tax Dispute Resolution, and Tax Litigation practice at PwC Legal, a Belgian law firm with offices in Brussels, Antwerp and Ghent. Ine is involved in providing not only legal advice but also, specifically, litigation and dispute resolution services. She has assisted with tax procedures before Belgian Courts, including the Supreme Court, the Constitutional Court and other tax courts (first instance and appeal) and is also involved in settlement negotiation for litigated disputes. Before joining PwC XLegal, she held multiple leadership positions at PwC including global indirect taxes leader, partner in charge of services to the EU Institutions, and global indirect taxes policy leader. She has delivered both policy services and advice and has been involved in litigation (e.g. the ARO Lease case). Ine has been a member of the European Commission’s VAT Expert Group since 2012 and has been lecturing since 2010 on the LLM International Tax Law program at the Vienna University of Economics and Business (Wirtschaftsuniversität Wien) and as guest professor at VUB (“Vrije Universiteit Brussel”), the University of Liege and other universities. She has also published extensively. Ine was Belgian Taxman 2009 and, in 2006, was elected 5th Global Most Influential Tax Expert by Tax Business and 1st Indirect Tax Expert.

Rebecca Millar is a Professor of Law at the University of Sydney Law School, Australia, a pro bono academic advisor to the secretariat of OECD Working Party No 9 (WP9), and also a joint General Editor of the World Journal of VAT/GST Law. She has previously worked as an external expert for the International Monetary Fund and the World Bank and as a tax advisor with Ernst and Young Australia. She is a past member of the Australian Taxation Office’s GST Advisory Group and its GST Rulings Panel and was a member of the panels of experts for the Australian Board of Taxation’s Review of the Legal Framework...